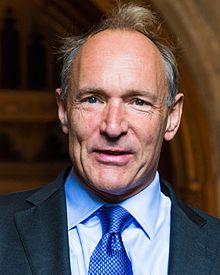 Sir Timothy John Berners-Lee is an English computer scientist, best known as the inventor of the World Wide Web. He is a Professional Fellow(an academic research position at a university or other institute) at the University of Oxford, and a professor at the Massachusettes Institute of Technology(MIT).

Berners-Lee was born on 8 June 1955 in London, England, the eldest of the four children of Mary Lee Woods and Conway Berners-Lee. His parents were computer scientists who worked on the first commercially built computer, the Ferranti Mark 1. He attended Sheen Mount Primary School, and then went on to attend south-west London's Emanuel School from 1969 to 1973. He studied at The Queen's College, Oxford, from 1973 to 1976, where he received a first-class Bachelor of Arts degree in physics. While at the university, he built a computer out of an old television, which he bought from a repair shop.

After graduation, Berners-Lee worked as an engineer at the telecommunications company Plessey in Poole, Dorset. Berners-Lee worked as an independent contractor at CERN from June to December 1980.
While in Geneva, he proposed a project based on the concept of hypertext, to facilitate sharing and updating information among researchers. To demonstrate it, he built a prototype system named ENQUIRE, an engine similar to the World Wide Web, but more like a wiki than a web. This would give him the ideas for creating the Internet, that would affect generations to come.

Development of the Web

Berners-Lee wrote his proposal in March 1989 and, in 1990, redistributed it. It then was accepted by his manager, Mike Sendall, who called his proposals "vague, but exciting". He used similar ideas to those underlying the ENQUIRE system to create the World Wide Web, for which he designed and built the first web browser.
Berners-Lee published the first web site, which described the project itself, on 20 December 1990; it was available to the Internet from the CERN network. The site provided an explanation of what the World Wide Web was, and how people could use a browser and set up a web server, as well as how to get started with your own website.